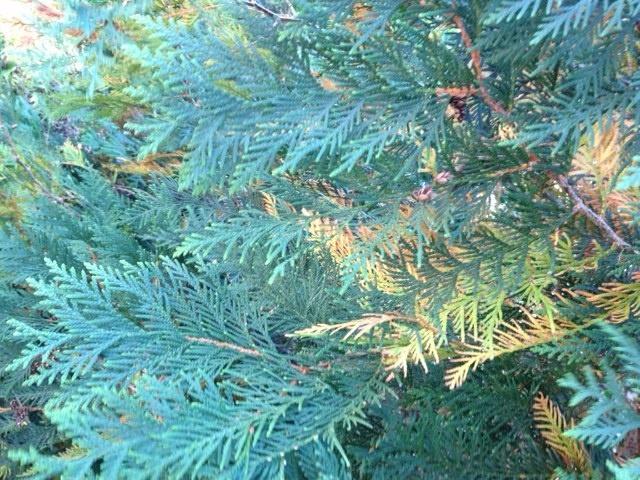 Ginny on the Road

Recently, I was talking with a lady who said, “Mary, my evergreen tree is dying and so is my neighbor’s.” I chuckled to myself because this is the same thing I’ve heard for at least 30 years and it is almost always at this time of the year. Pretty much all evergreens will drop their needles that are older than 2-7 years in the fall. The needle drop depends on the species, but many spruce and pine will drop their needles that are 3 years old. The needles will turn yellow, then brown and drop off. This occurs on spruce, pine (yes, on mugo pines too), junipers, yews and arborvitae. Arborvitae shed branchlets rather than needles so they really are noticeable as they drop on our sidewalks, driveways and into our rain gutters. Yews tend to shed their growth earlier in the season, usually in late spring or early summer. Sometimes, people are skeptical when I say this is a natural occurrence as they have never noticed it before on their plants, but evergreens will shed different amounts of needles each year depending on what the weather conditions were like. To use pine as an example, if the needles were formed during a year of particularly good growing weather, they may have put on heavy growth. The following year it is likely that a lot of needles will shed. If the needles or branchlets turning yellow and dropping off are inside the tree between the trunk and new growth on the tips of the branches, there is a very good chance your evergreen is just doing what Mother Nature commands.

There are several fungus diseases of evergreens that cause the needles to drop too. Many of us have heard of a fungus disease called needle cast. Fungus diseases are more prevalent in wet weather and we have had lots of that. Colorado blue spruce is especially susceptible and Black Hills spruce too, but to a lesser extent. The needles that are affected turn a purplish brown and then drop off. Often, you can see black dots on the bottom of the needles. We often see needle cast diseases in shelterbelts or where trees are planted close together. This is because the disease spreads where plants are crowded and not much air can get into the branches to help dry them (remember, fungus diseases love moisture to drive and thrive). You can spray for the diseases, but it is a multi-year process and can be very hard if the trees are huge.

If you have a problem with your evergreens, it is a good idea to take a branch to an arborist if you have one nearby. You may also be able to take a sample to your extension office to have it sent in and tested to find out for sure if it is a disease or just the natural rhythm of an evergreen’s life.